Technology firms have been laying off staff at the fastest rate since the start of the COVID-19 pandemic, as companies look to scale back costs amid fears of a global recession in 2023.

Layoffs.fyi, a website that tracks corporate layoffs and dismissals across dozens of industries, shows that 153,160 tech workers lost their jobs in 2022. It means that more than 50% of all tech job losses since the start of the COVID-19 pandemic have occurred in the last 12 months. What’s more, that figure is around 10 times higher than the total number of technology job losses in 2021.

It’s an alarming number that shows just how real the fear created by the current global economic slowdown is, and it’s also a stark reminder of the panic that ensued during the early days of COVID-19, when more than 70,000 tech workers lost their jobs between March and December 2020.

Even so, the number of job losses last year is well short of the worst year in tech. That was 2001, when more than 2 million tech company workers were laid off following the so-called dotcom bubble, according the Silicon Valley Business Journal.

For tech companies, the most lethal employers in 2022 were Amazon.com Inc. and Meta Platforms Inc., which axed a combined 21,000 staff throughout the year. Twitter Inc.’s new Chief Executive and owner Elon Musk also made headlines for chasing away hundreds of staff, but Booking Holdings Inc., which runs the Booking.com website, and Cisco Systems Inc.. terminated more staff, with 4,375 and 4,100 job cuts, respectively. 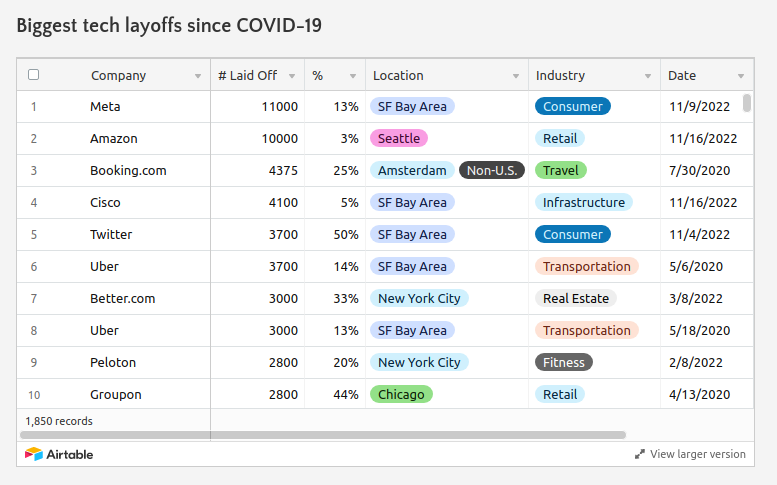 In total, Layoffs.fyi’s list shows that 1,172 tech firms made cuts to their workforce in the last year. However, it’s worth noting that the data collected is not exact, but rather based on both media reports and company announcements. The published numbers do, however, illustrate how quickly things have changed within the tech industry. In the first quarter of 2022, fewer than 10,000 job cuts had been reported throughout the industry. However, that figure had doubled by May and rapidly accelerated for the remainder of the year.

For tech workers facing the ax, there is a silver lining, at least. According to the Wall Street Journal, which first came across the data, at least 79% of the laid off workers found themselves a new job within three months of losing their previous one.