Announced at Dreamforce, Salesforce’s annual customer conference in San Francisco, the innovations include a new feature called Slack Canvas that it says will transform how teams will curate, organize and share work-related resources. Slack Huddles gets a major update too, with the introduction of lightweight video, multiperson screen sharing, message threads and more. Finally, the new Slack platform for developers is being made available in beta test mode, making it easier to create and share workflows for automating work.

First up is Slack Canvas, described as a new surface within Slack that teams can use to capture information, find answers and move projects forward. Canvas is meant to supplement the linear, real-time collaboration experience of Slack channels with a more permanent space for key resources and information. Teams can even bring in data from multiple systems of record — such as Salesforce, of course — and create automations for business-critical workflows.

“We’re focused on helping our customers navigate the future of work, whether that’s hybrid, remote or in the office,” said Tamar Yehoshua, chief product officer at Slack. “We’ve been introducing capabilities like Slack Connect, clips, huddles and now canvas, that bring more value to our customers and enhance working in a digital HQ.”

Other possible use cases for a canvas include streamlining employee onboarding and organizing marketing campaigns with a canvas that’s connected to each Slack Connect project channel. By pairing a canvas to a Slack Connect project channel, the company said, teams can manage all the steps of a campaign process from a single collaborative view that tracks content, files and data.

Slack Huddles was introduced in 2021 as a lightweight, audio call feature that aims to replicate the spontaneous and informal nature of in-person office communications, only in the digital realm. Building on this, Slack has announced more co-working capabilities for huddles, including the ability to turn on video in those informal calls, and multi-person screen-sharing, drawing and cursors. Finally, decisions taken during huddles will now be saved automatically in the channel or direct message where the huddle was started, so users can keep better track of important decisions and the next steps to be taken. 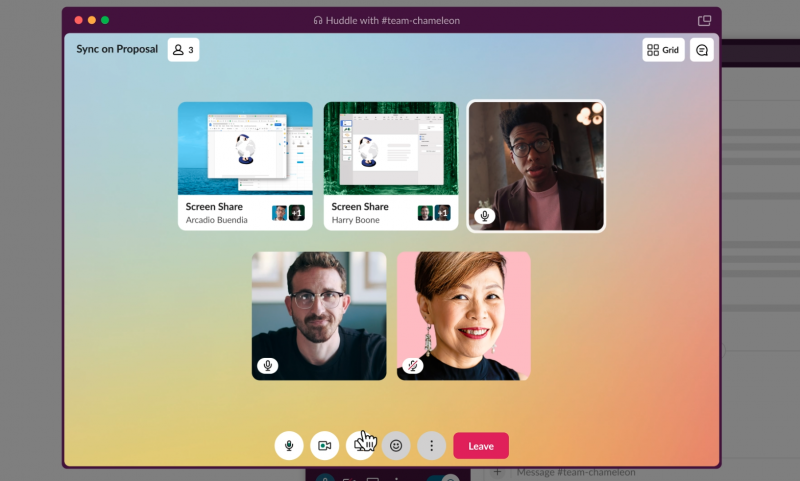 As for the Slack Platform, it’s now available in open beta and will be of interest to developers, since it provides them with all of the tools they need to build time-saving automations that move work along faster, such as workflows for closing deals, launching new sales campaigns and more besides.

Slack explained that it re-engineered its platform to make it more customizable by developers, creating an entirely new, modular architecture. Included within Slack Platform is a new command line interface and software development kit, along with modular, reusable functions that make it possible to repurpose code used in one workflow across others.

In addition, the Slack Platform supports Slack’s Bolt framework, which enables developers to use their own software development kits and deploy their Slack code atop their own computing infrastructure. Developers can get started today by heading over to the Slack API site to download the new CLI.