Collaboration came to the fore at Microsoft Corp.’s Build 2022 conference today as the company unveiled a host of new developer-focused tooling and features for Microsoft Teams.

One of the most exciting updates is the new Live Share experience that makes it possible for meeting participants to interact in new ways with shared applications. The feature will make it possible for users to annotate, edit, zoom in and out, and interact with shared content in various new ways.

Microsoft said new extensions to the Teams software development kit will make it possible for developers to build Live Share features into outside applications and enhance collaboration. This new tooling is built on Microsoft Fluid Framework and makes it possible to create synchronized meeting experiences with just a few lines of code, Microsoft said.

A number of partners have had early access to the tools and already offer new Live Share experiences. These include Hexagon AB, which has created a new collaborative engineering experience in Teams (pictured), and Adobe Inc.’s Frame.io, which has enabled synchronized, interactive reviews of video workflows within Teams. Another example is MakeCode, which is building interactive learn-to-code gaming scenarios within Teams.

To improve user experiences, developers may also want to take advantage of the newly enhanced link unfurling capability within Teams. With link unfurling, users can preview rich content associated with a shared link from Teams, and then take action within that preview. New features make it possible to unfurl link previews for uninstalled applications and links that are not associated with Teams apps.

Microsoft explained that developers of Teams apps will be able to make simple additions to the app manifest in order to enable their app links to unfurl into a rich card preview. For all other links, the company added, developers soon will be able to add structured schema.org metadata and tag actions in their website to enable actionable previews in Teams.

In another major announcement, Microsoft said it will launch a preview of Collaboration Controls in Microsoft Power Apps (below) this summer. Developers will be able to use low-code tools to drag and drop Teams and Microsoft 365 collaboration capabilities such as Chat, Meetings, Tasks, Files and Approvals into business applications built using Power Apps.

Also available in preview starting today are the new Microsoft Graph APIs for Teams. With these application programming interfaces, developers can embed rich and engaging Teams Chat and Channel features into third-party applications. That way, licensed users can collaborate between Teams and their own apps without having to switch among multiple tools.

The spate of updates continued with Microsoft announcing the general availability of Teams Toolkit for Visual Studio Code and a preview of Teams Toolkit for Visual Studio. It provides an array of tools developers can use to create, debug and publish their apps in Teams across web and mobile devices. The idea is that developers can save time by automating configuration across various portals, cloud resource templates and continuous integration and continuous delivery workflows.

As a second benefit, Teams Toolkit also makes it easier to build one-way notifications that alert users to an event in the web app. Alerts can be displayed as an Adaptive Card directly within Teams, Microsoft said. The Toolkit also contains features for developers to build and publish commands, responses and notifications for business-related actions.

Teams App Store isn’t being left behind either. Microsoft announced a number of updates here that it said are designed to help developers maximize user engagement and monetize their apps more effectively.

For instance, it’s offering improved discoverability features with intelligent recommendations and app flyouts. The enhanced contextual discovery capabilities are designed to get apps in front of the right users, based on the context of what they’re searching for, Microsoft explained. Developers may also want to take advantage of a new “featured apps” section in the Teams App Store that will make it easier for users to find apps relevant to their unique productivity and collaboration needs.

On the monetization side, Microsoft has added a new API to configure in-app purchases in general availability (below). With this, developers can make it simple for users to upgrade from the free version of their apps to a paid subscription from within Teams. There will be new license management capabilities too. Set to launch in preview in the summer, these will allow customers to assign and track licenses for purchased Teams apps directly within Teams. 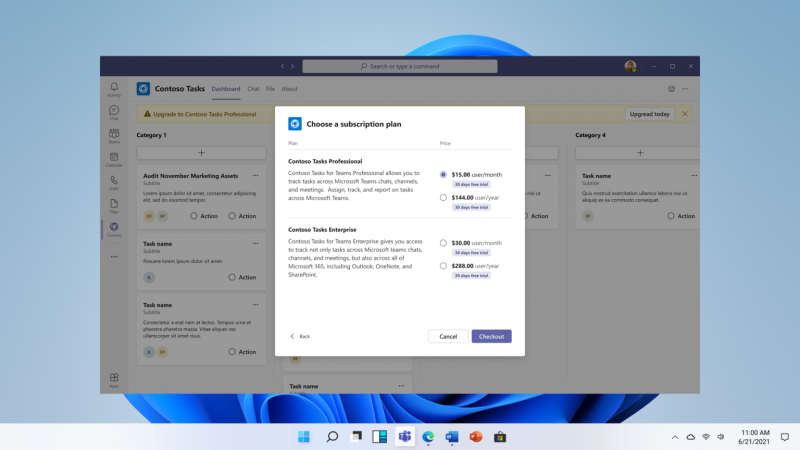 Another interesting app is MURAL for Teams, which brings a shared collaboration space directly into a Teams meeting or chat room. “Users can improve teamwork with asynchronous visual collaboration and transform disengaged conversations into productive, engaging meetings and workshops using hundreds of templates and proven, guided methods that empower teams to deliver breakthrough results,” Microsoft promised.

Then there’s the new SAP S/4HANA operational purchaser chatbot that brings the collaborative capabilities of Teams to SAP S/4HANA users. The app relies on Microsoft Azure Active Directory authentication and Microsoft Graph APIs to give users a way to call others or schedule Teams meetings with business partners via the bot. Microsoft said this is an example of the new, tightened integration between Teams and third-party apps that today’s updates enable.